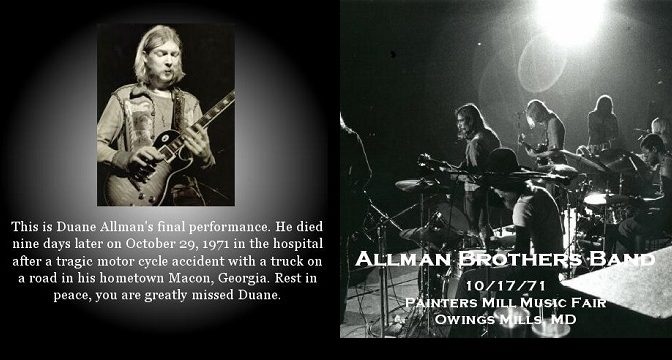 When a budding radio DJ arrived for an evening with ABB on October 17th, 1971 for an interview with their singer, he could not know the Owings Mills show would see Duane Allman grace and leave the stage to never return, as the artist perished in a motorcycle crash a mere 12 days later, but he felt it wasn’t a regular gig in terms of delivery.

Since the ensemble played two sets that night, they notched a more concise and a more muscular set than the one captured for an LP At Fillmore East seven months earlier, so the Maryland recording doesn’t cherry-pick the best moments of the concert which feels entirely outstanding now despite being a typical outing for the group the. It’s a testament to their vitality, and mortality too – but the listener will have to abstract away from Duane’s forthcoming demise to fully grasp the “in the moment” specialness of a familiar material. With the collective’s vigor seeping through the slightly muddy sound, there’s much to enjoy in both the music and the mood.

Southern spirit is flowing freely from the second Gregg Allman’s introductory organ roar gives way to the piano-sprinkled rumble of Statesboro Blues where Dickey Betts’ six-strings lines are caressed by Duane’s slide, to the last note of Whipping Post whose shortened, yet monumentally majestic, version packs a powerful punch. It’s the thunderous attack courtesy of Butch Trucks and Jaimoe Johanson, though, that drives Trouble No More to the point of delirium even before the two guitars begin to sting, complementing Berry Oakley’s bass assault and the younger brother’s vocals. If his sibling’s addressing the audience may raise many a smile, the tectonic shuffle of Don’t Keep Me Wondering must send the laziest feet into a dance frenzy, as fingers wring celestial licks from frets here and on Done Somebody Wrong whereas the jive-infused One Way Out provides the whole sextet with an opportunity to shake, rattle and roll.

The band unfold their Latin-tinged lyricism on In Memory Of Elizabeth Reed and top it with an ivories’ wigout – which sadly fades due to the original cassette getting flipped – but, followed by Hot ‘Lanta carrying the same wild vibe and also smeared wirh sax, the flow doesn’t lose impetus. As a result, The Final Note is more than a simple historical document: this album preserves the greatness that would soon dissolve in eternity. 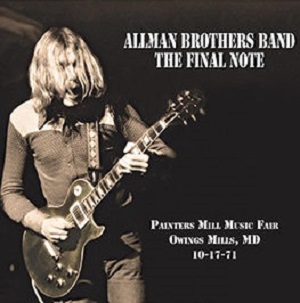