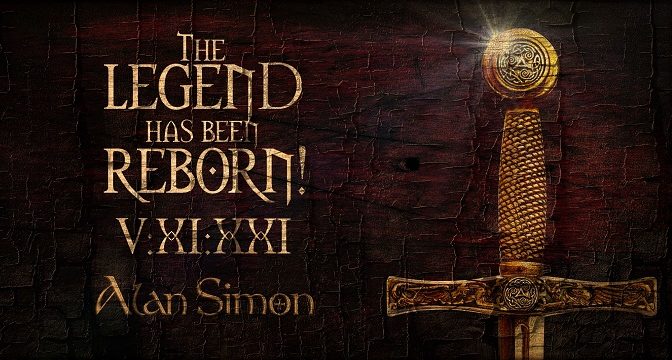 Well, I don’t know much about Alan Simon or this series of Celtic rock opera Excalibur releases. This being my first take on the project which previously released 4 studio and 2 live albums featuring different musicians on each one, though there are a few holdovers. I do know that Cherry Red recently released the first 4 Excalibur studio albums plus a couple of live shows in a 6 CD box. 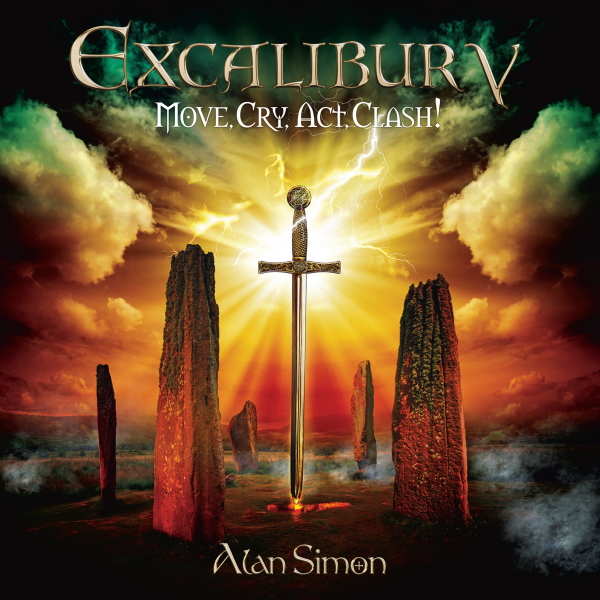 As a fan of many of the artists involved this is an outstanding concept release that features singers such as Bernie Shaw, Roberto Tiranti and Michael Sadler singing in styles they may do with their respective bands. And with that said, that contributes to the appeal here as these singers deliver performances like they have never before. Amazing performances, as well as from the various musicians such as Steve Hackett, Martin Barre and John Helliwell, among others. The last track is a wonderful surprise, as it features the late great John Wetton singing a ballad, The Vision.

An amazing production from Alan Simon, who has written and assembled a stellar cast here. As a Heep fan it is really something to hear Bernie [who delivers quite a theatrical intro] and Roberto [Ken Hensley’s Live Fire] sing in such a different project.

*For more info check out these links, as well as the press release below….

Move, Cry, Act, Clash! concludes its 12 tracks with The Vision featuring the legendary John Wetton (King Crimson/Asia) in a beautiful tribute to the friendship and respect between these two musical giants.

Alan Simon is a Breton songwriter and director. Author of modern operas, his works are performed in various national theaters (Russia, Germany, France …). More than 300,000 spectators came to applaud Excalibur or Tristan & Yseult. Alan has obtained several gold and platinum records and his creations have received several awards. In the USA, Alan won the Grammy for best producer in 2008 and for best song, Circle of Life, performed by Jon Anderson of Yes. His album Big Bang (2018) is the soundtrack of the City of Space in Toulouse (an educational park about the conquest of space). After the film O Gengis in 2005 (with Omar Sharif and Jean Reno), he has just finished Monsieur Constant, his second film for the cinema, which is in production during 2021. Today Alan wants to go on tour around the world with his extraordinary musical round table where many legends of folk and rock meet.

Alan Simon: “Excalibur brought me a lot of happiness because by creating this musical round table, I had the great chance to collaborate with incredible rock and folk legends, pillars of mythical groups: Yes, Supertramp, Fleetwood Mac, King Crimson, The Moody Blues, Alan Parson, Asia, Barclay James Harvest, Genesis, Fairport Convention, Runrig, Jethro Tull, Saga, Uriah Heep… Since its creation 20 years ago Excalibur has represented 5 studio and 3 live albums including 120 original tracks. Offering a new album is not trivial. You have to give everything. So I made this opus V by investing myself 100% with an ‘old-fashioned’ production. No home studio but the joy of living in a large studio (Drums code studios in Italy) with great soloists and a fantastic symphony. Then I contacted magical interpreters that I like. What a joy to hear the guitars of the legendary pillars of Genesis and Jethro Tull: Steve Hackett and Martin Barre or the voices of Supertramp from Saga and Uriah Heep: Jesse Siebenberg, Michael Sadler and Bernie Shaw without forgetting this incredible talented singer Roberto Tiranti. We spent 6 months in a mixing studio with an average of 100 tracks per title. I hope that this more rock album than the previous ones will sign a real return on stage of this universal legend, ‘ever green’ say the English. Thank you to all those who supported Excalibur. After 300 000 spectators in 4 tours, I hope that this musical round table finally finds its audience under the aegis of sharing. These 12 new songs underline the urgency to get moving for our planet. More than ever our destiny is in our hands. And everything is good to take. The concept of Excalibur and its musical knights must contribute to this new start. Artists can (and must) get involved more than ever.”